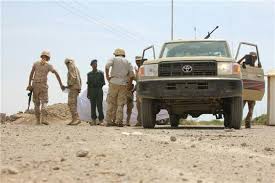 MARIB, Feb. 19 (YPA) – Defense Minister in Hadi’s government Mohammed al-Maqdashi was seriously injured and four of his escorts killed in a blast from a bomb planted on his car in Marib province, sources reported on Wednesday.

The explosion occurred during al-Maqdashi’s visit to one of the military sites on the outskirts of Marib province, the sources explained, without clarifying until now whether or not al-Maqdashi has died.

No comments have been made by Hadi’s government about the details of the incident so far.

#Breaking: Two homes were burned in coalition’s bombing on Durayhmi district in #Hodeidah