Violent clashes break out between coalition gangs in Taiz 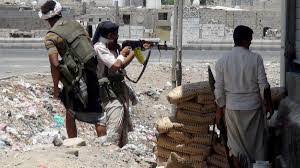 Local residents said that they have suffered the ravages of heavy fighting in some neighborhoods of the city since dawn Wednesday, in which all kinds of light and medium weapons were used.

Residents confirmed that the clashes between “Ghazwan al-Makhlafi faction and Ghadhar al-Sharabi faction, two leaders of the Al-Islah party, extended from Waday al-Qadi north of Taiz to the Aljamhwary areas in the city center.

Residents added that the combatants targeted houses with machine guns and shells, killing a woman and injuring a girl when a shell hit their house as a preliminary toll.

While the fighting forces are keeping their losses in the clashes, eyewitnesses said that one of the al-Makhlafi elements was killed in the clashes.

Tensions erupted between the two sides after an armed ambush carried out by the “Ghadhar” gang against Ghazwan, which resulted in the latter being severely injured, his foot was amputated early last week.

The clashes between coalition militias in Taiz are part of attempts to take  control over levies and suspicious drug trade.