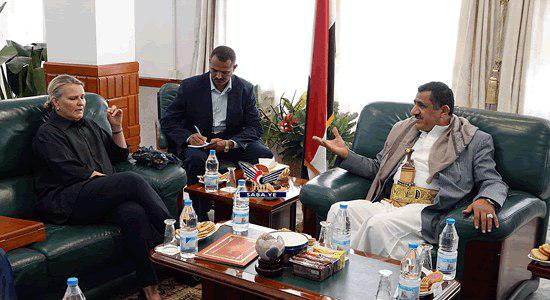 During the meeting, they discussed the direct and indirect effects of the aggression and blockade on the oil and gas sector.

The meeting touched on the arbitrary actions of the coalition through detention of oil derivatives vessels as well as the detention of the gas ship Eugenia for 60 days despite receiving entry permits from the United Nations.

He stressed that these arbitrary measures are causing crises and supply bottlenecks in oil and gas derivatives and the negative impact on various vital sectors.

He warned of an environmental disaster that could occurred due to preventing maintaining the floating Safer Tank Reservoir off the coast of Hodeidah.

The Safer tank carries more than 1 million barrels of crude oil, which has become a powerful bomb that threatens the marine environment.

The minster called on the United Nations to press the Saudi-led to prevent the detention of oil and gas vessels and to facilitate their entry into the port of Hodeidah.

It is noteworthy that the floating tank Safer carries more than one million barrels of crude oil and the aggression refused to unload the quantity or carry maintenance of the tank since the beginning of the aggression.