Al-Thawra Newspaper: Endless violations and crimes caused by the war against Yemeni children 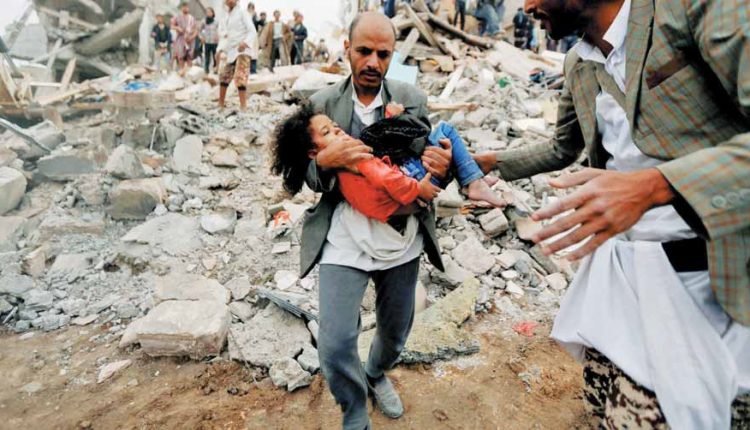 SANAA, Nov. 21 (YPA) –  Occasionally, many Yemeni children wake up under the rubble of houses without walls. No voices around them, only, the sound of bombs. No hand to embrace them, but the hand of the giant machine trying to get them out of the rubble,.

During five years of aggression against Yemen, the children lived a bitter life between injuries, disabilities, famine and death, physical diseases and the same deadly epidemics, violations, attacks, displacement, denial of education, in addition to direct killing by all available means.

The Saudi-led aggression with U.S. and Israeli support targeted all aspects of life in Yemen. Childhood is the most affected segment of society, making it the worst tragedy of modern times.

The aggression machine has been able to claim the lives of thousands of children directly or indirectly. Also, the blockade and destroying medical infrastructure have helped to spread epidemics alarmingly. The missiles hit various parts of Yemen, destroyed hundreds of schools, making the children away from them, and destroyed homes. Many citizens took what has been lift of the schools as displaced shelters.

Since March 2015 to November 2019, more than 3,809 children have been killed and more than 4,035 injured. An average of five children killed a day,”  Inseqam Al-Sharif, director of the Civil Bloc for Development and Freedoms told Al-Thawra Newspaper. 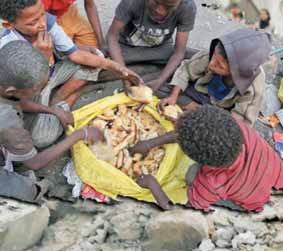 “The humanitarian situation in Yemen is getting worse, and no a day could be passed, without hearing about the deaths of children,” she said.

According to international reports, “70% of the victims were killed by shelling of countries of aggression on their homes and 20% in their schools. 10 % in other ways, such cluster bombs explosions or remnants of the bombing.

According to al-Sharif, “the number of children and women severely malnourished is 3.2 million, approximately 7.4 million Yemeni children are in dare need of humanitarian and health assistance, and more than half of Yemen’s children do not have access to safe drinking water and adequate sanitation.”

The ICRC and the UN Coordination of Humanitarian Affairs offices confirm that Yemen is currently suffering from the largest food insecurity crisis that coincided with the world’s largest cholera pandemic, with one third of those infected with the epidemic under the age of 17.

“2.1 million children under the age of five are malnourished. 400,000 are severely malnourished, including one child dies every 10 minutes. In Yemen 1.2 million married women are malnourished that have a negative impact on their health and the fetus’s health during pregnancy and after childbirth,” said Dr. Yousef Al-Hadari, spokesman for the Ministry of Health. 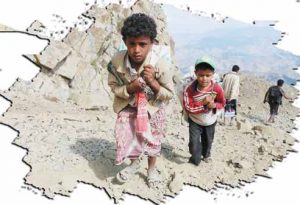 “60 per cent of the victims of the epidemics that swept Yemen during the aggression were children, 800 children were permanently disabled as a result of direct bombing, and congenital malformations in newborns increased by 3 per cent due to the use of forbidden bombs,” he said.

According to the World Health Organization, about 80,000 children under the age of five die each year in Yemen as a result of acute malnutrition.”

For the past five years, Yemen has been plagued by outbreaks of deadly diseases and epidemics, such as cholera, diphtheria, H1N1 influenza, measles, malaria, dengue fever, Haemorrhagic fevers, acute pneumonia, cerebral meningitis, chickenpox and whooping cough, as well as mumps, Leishmaniasis, rabies and liver infections.

The aggression by destroying the infrastructure of the health sector and removing it from its scope has made Yemen a breeding ground for the spread of epidemics.

Moving the central bank to Aden, the blockade associated with the aggression and the closure of Sana’a International Airport, double the suffering of citizens and prevented 200,000 patients from travelling for treatment abroad, 30 per cent are children. 10,000 children died, according to al-Hadari.

According to UNICEF, WHO and WFP figures, “1 million Yemeni children are at risk of being infected with diphtheria, which is spreading at a rapid rate in the country, which is also suffering from the widespread of cholera.

“More than 100,000 cases of cholera have been recorded in Yemen since the beginning of 2019, most of them are under the age of 15,” save the children said. While the number of cholera victims of children during the period of aggression in Yemen was around 1,000 and 500,000, according to official estimates.

In 2015, more than 10,000 children died of preventable diseases due to the low health system, according to previous UNICEF reports, which also indicated similar declines in the following years.

“The sick children in Yemen are living in tragic situations in light of the continuing aggression and the worsening economic situation in the country as a result of the economic war. Many of them have lost their lives despite the possibility of recovery, due to the lack of medicines and access to Yemen,” the spokesman for the Ministry of Health said.

According to the World Health Organization, the total number of people living with cancer in Yemen is 35,000, including more than 1,000 children.

The health tragedy of Yemeni children is not limited to the aggression, but the explosions caused by the bombing have caused psychological damage to a wide range of children.

“The United Nations has estimated that 90,000 children are suffering from psychological problems,” al-Hadari said. 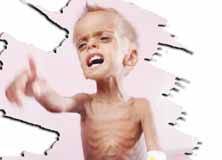 A survey published in 2018, conducted on nearly 1,000 children in Sana’a alone, found that “79 percent of them showed signs of serious psychological consequences.” The study reveals that “in the first year of aggression, family members began Note the involuntary urination of children, and their refusal to be alone or do not want to leave the house, as stated in a working paper for Yemeni activists on “the suffering of children in the war on Yemen” during the seminar on (message of Yemeni children from the rubble) held in Sana’a on September 1, 2019.

Save the Children organization said it had evidence of what experts called “toxic stress,” the most serious form of stress that a child can experience, caused by strong, repeated or prolonged adversity without adequate care.

In areas that have been bombed, children face: bedwetting, nightmares, alertness, sadness, depression, anxiety, aggression, feelings of withdrawal and many other challenges, psychological indicators that experts say will weaken their ability to engage in daily life, including an inability to concentrate or perform well in School, learning new information, forming relationships and attachments, or creating a sense of security, ”said Talat al-Shargabi, a spokesman for the Ministry of Human Rights.

Al-Shargabi told Al-Thawra: “The aggression displaced about 1.5 children from their homes to refugee camps with poor living and climatic environment. Displacement has contributed to: high malnutrition, widespread epidemics due to water scarcity and poor hygiene, many children dying as a result of cold, lack of medical camps or treatment; thousands of displaced students are denied basic and secondary education; This has negatively affected the lives of children, the rise of begging among displaced children and many of them with serious skin diseases. ” 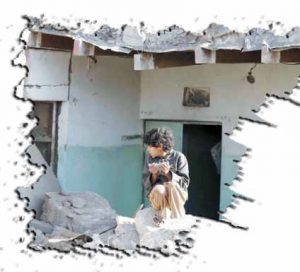 The escalation of aggression in late 2018, in an effort to control the port of Hodeidah, displaced half a million children to the displacement areas of Hajjah, Sana’a, Amran and Mahweet.

“The aggression, which has created economic crises, has contributed to the spread of child labor, who have become less able to live in homes where they cannot find food after the salaries of their fathers were cut off as a result of the Central Bank’s move to Aden.”

According to Save the Children reports, “1.4 million children are working in Yemen and are deprived of their most basic rights. The direct bombardment of educational facilities has also led to children dropping out of their schools and many have turned to business in scenes that violate their rights to education, recreation, care and life.

According to a report by the International Labor Organization (ILO) in late 2018, about 34.3 percent of children aged 5 to 17 work in Yemen, and indicate that the number is on the rise, while aggression has caused a high rate of early marriage for girls under the age of 18 as a result of their distance from school and fear of exploitation.

According to al-Shargabi, many children who leave their schools to seek employment are raped, sexually harassed and physically and verbally abused in different governorates, including Taiz and Aden, by employers or some workers, in addition to rapes carried out by the occupation in the southern and coastal governorates.”

Since the first moments, the  aggression targeted the education directly where its aircraft targeted the educational  infrastructure and  destroyed 3500 schools by its raids  and missiles. The planes directly targeted Yemeni students, and  the most prominent attack was the targeting of the Dahyan-Saada children’s bus in August 2018, which killed 51 people and injured 79, and Al-Ra’i School in April.

On the other hand, teachers’ salaries were cut off three years ago and the ministry was unable to print the textbook.

“This has negatively impacted the student’s level of achievement and his psychology has been affected ”says Abdullah Al- Naimi, Undersecretary of the Ministry of Education for the education sector.

“”Yemeni students were targeted in their schools, homes, roads, parks, gardens and grazing places, and the aggression led to the suspension of 4,500 schools and made 2 million children away  from education.” al-Naimi told Al-Thawra

Al- Naimi added “Our children are not as children of the world; the world is looking for the quality education and seeks to it, but we in Yemen are still looking for our children  right to live and their right to education.”

Besides that suffering, many school dropouts in central and southern Yemen are recruited to death incinerators.

Some figures indicate that there are four thousand children fighting in the line of aggression, and the channel “Al-Jazeera” this year, revealed that the area of Al-Baqaa on the northern border is a holocaust for Yemeni children recruited by the Kingdom to fight the army and popular committees for a handful of money ranging from SAR 1,500 to SAR 3,000,.

British reports indicate that 40 percent of Saudi-Emirati mercenaries of aggression in Yemen are children in violation of international law.

The suffering of children does not end here. The aggression against Yemen has contributed to the creation of more than 80,000 orphans who have lost their families by direct killing where the number of orphans under seven is about 47 out of every 1000, which is preliminary figures.

“The post-aggression phase will reveal more numbers that are not recorded today” says al-Sharjabi.

He added that ” the aggression is working hard to create a distorted and wasted generation that can control its decision.”

He confirms that this targeting for Yemeni children means to destroy their  past by bombing its heritage, the present by trying to exterminate the current generation he fights in all fields in all fronts , and seeks to destroy the future by bombing children to kill as many of them as possible.

As the aggression against Yemen continues, the numbers continue to rise and children continue to suffer under global silence with the coming of International Children’s Day and while all children in the world will be demanding the right of entertainment , education and health,Yemen’s children still lack the right to live in peace.

#Breaking: #Saudi-led coalition warplanes hover over the sky of #Hodeidah