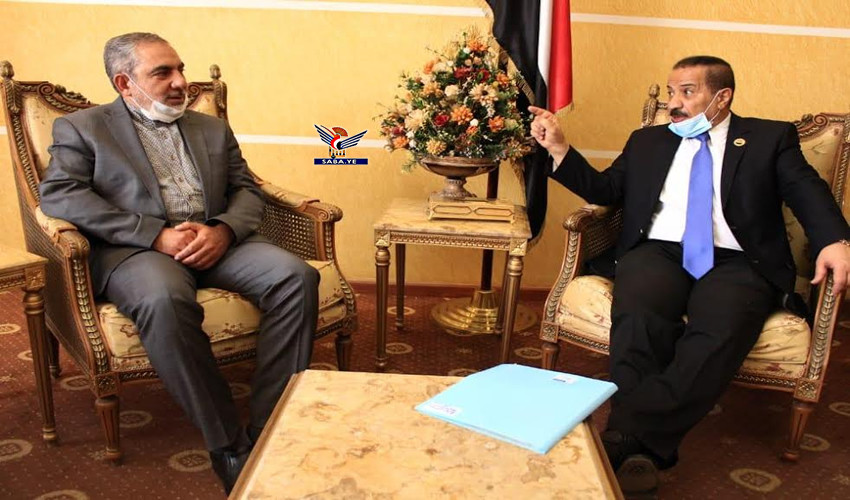 This came during his meeting with the Iranian Ambassador in Sana’a, Hassan Erlo.

In the meeting, Sharaf pointed out that what is currently being discussed under the auspices of the United Nations and the American envoys with Head of the national negotiating delegation must include the spirit of the Hormuz peace initiative.

He appreciated the principled stance of Iran since the beginning of the aggression and its standing by Yemen and its repeated calls for the necessity of ending the military aggression and lifting the blockade.

Regarding regional and international developments, the foreign minister pointed out that the Saudi Foreign Minister’s recent statement to the US channel ‘CNN’ on the prospects for peace in the Arabian Peninsula and the Gulf region reflects a failed maneuver and falsification of facts to justify any upcoming normalization with Israel.

In turn, the Iranian ambassador in Sanaa confirmed his country’s keenness to develop relations with Yemen and to continue to make efforts to end the military aggression and lift the comprehensive siege imposed on the Yemeni people.

Erlo explained that Iran seeks to remove any tension in the region, and from this standpoint, it launched the Hormuz Peace Initiative.

The meeting touched on ways to develop bilateral relations between Yemen and Iran and push them to broader horizons, especially in the fields of health, education, and scientific research.

Prisoners’ committee condemns crime of killing against prisoners in Marib